Farm-to-school (FTS) programs began in two schools in 1996 as a grassroots movement and now reach approximately 23.6 million students in 42% of U.S. school districts (U.S. Department of Agriculture, 2016a). FTS programs are supported by policy and funding at the federal and state government levels and financial support from private foundations (National Farm to School Network, 2016b). Interest in assessing the impact of FTS programs and other local food initiatives has recently grown, not only to evaluate progress, but also to demonstrate efficacy to funders (Jablonski and Schmit, 2015; Thilmany McFadden et al., 2016).

FTS programs leverage food procurement and educational programming to increase nutritional knowledge and skills among students, improve the nutritional value of school meals, and provide economic opportunities for local farmers (Conner et al., 2012; Izumi, Wright, and Hamm, 2010; Vogt and Kaiser, 2008). While FTS programs vary considerably from one school to another, all programs use a multi-pronged approach that includes a mix of core elements such as school gardens, local food procurement, nutrition education, and agricultural literacy (National Farm to School Network, 2016a; Vermont FEED, n.d.).

Economic impact studies of local food initiatives beyond FTS programs have shown positive impacts, but these impacts tend to be modest or overstated (Gunter, 2011; O'Hara and Pirog, 2013). Overall, claims related to economic development benefits remain largely untested (Hughes and Boys, 2015). We look at the economic impacts of local food procurement, which is a central component of FTS programs.

FTS as an Economic Development Strategy

There are two ways in which local food procurement by schools are viewed as an economic development strategy. First, local purchases lead to increased economic activity at the community level through import substitutions and spillover effects (Martinez et al., 2010). Second, farmers gain access to larger markets, enabling them to grow their operations because of increased demand. Farmers participating in FTS programs tend to have small- and medium-scale operations and to sell directly to consumers or to institutions through a middleman (Low et al., 2015). These small- and medium-scale farmers are believed to have a greater impact on the social and economic development of their communities because they purchase more inputs locally and interact directly with their consumers. Goldschmidt (1947) hypothesized that farm scale and farm management impact community well-being, and the concept of Civic Agriculture holds that communities have a civic duty to support local food producers due to their positive impact on economic and community development (Lobao, 1990; Lyson, 2000, 2004).

Several studies have assessed the economic impact of FTS local food procurement (see box 1 for a description of economic impact studies). Table 1 summarizes six economic studies of FTS local food procurement. These studies used an input-output model called IMPLAN to examine various scenarios of local food use (see box 2 for a description of the IMPLAN model) at varying geographic scales, with varying levels of details, assumptions, and customizations of the model. Haynes (2009) and Gunter (2011) customized the agricultural sector in IMPLAN to better reflect the patterns of how small- and medium-scale operations that participate in FTS programs spend money. The IMPLAN model is frequently customized so that it appropriately represents the impacts of smaller, diversified farms and other small-to-medium scale operations that frequently participate in FTS programs (Lazarus, Platas, and Morse, 2002; Schmit, Jablonski, and Kay, 2013; Swenson, 2011). Customizing the model requires access to data: the Roche et al. (2016) study specifically mentioned its inability to customize the IMPLAN model due to lack of secondary data.

An economic impact study measures the changes in spending in a geographic area that would result from a hypothetical change in economic activity, such as a plant closing or opening, a festival, or a natural disaster. This type of analysis calculates the cumulative amount of money that cycles through the economy among industries, households, and government agencies, as a result of the change (Day, n.d.). Similarly, an economic contribution study measures the cumulative economic activity from an existing industry or events. Economic impact and contribution studies should not be confused (Watson et al., 2007), but results for economic impact and economic contribution studies are generally reported and interpreted in the same way.

The economic impact or contribution of an activity or event has three types of effects on the economy: direct, indirect, and induced effects. Taking FTS local food procurement as an example:

Economic impact and contribution studies use input-output (IO) and Social Accounting Matrix (SAM) models. The combination of these two models represents the whole economy under study, including transactions among industries, institutions, and households. The software package and database IMPLAN (IMpact Analysis for PLANing) is commonly used to conduct these types of studies. Data for the IMPLAN database are supplied by the U.S. Department of Commerce, the U.S. Department of Labor Statistics, the U.S. Department of Agriculture, and other federal and state government agencies. The latest IMPLAN version uses 536 sectors based on the North American Industry Classification System (NAICS) to represent the economy. The agricultural sector is represented by 19 sectors and the food manufacturing sector is represented by 45 sectors. 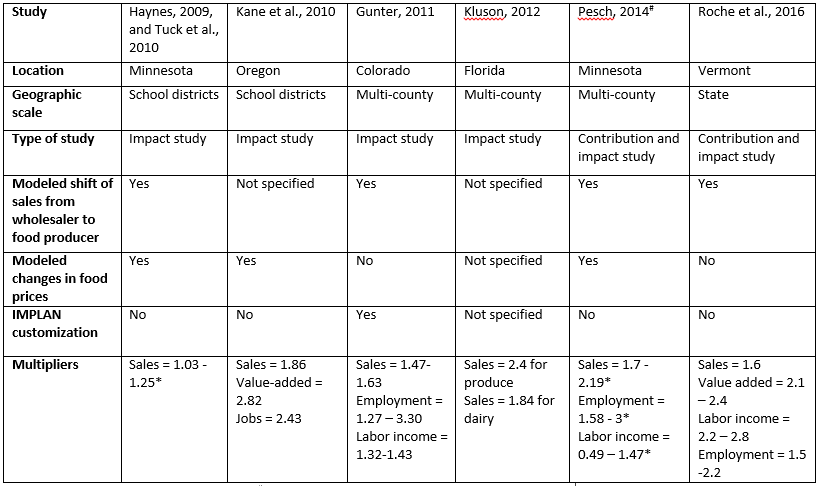 Beyond the actual results of these studies, the diversity of approaches is noteworthy. Some of the studies looked at demand for local food, including existing school purchases, purchasing goals, and changes in menus (Haynes, 2009; Kane et al., 2010; Pesch, 2014; Roche et al., 2016). The other studies looked at supply, including changes in the growing season, purchase shifts from wholesaler to direct from farmers, and changes in prices (Gunter, 2011; Haynes, 2009; Pesch, 2014).

The diversity of approaches and geographic areas makes it difficult to compare results across studies (table 1). While the IMPLAN multipliers allow for some level of comparison, direct comparisons are still not recommended. Still, multipliers can provide an indication of the general magnitude of impacts that can be expected from FTS programs. In general, smaller geographic areas show smaller impacts. The studies reported a sales multiplier that varied from 1.03 in the 2009 Minnesota study to 2.4 in the Florida study (Haynes, 2009; Kluson, 2012). The employment multiplier ranged from 0.49 in the 2014 Minnesota study to 3.3 in the Colorado study (Gunter, 2011; Pesch, 2014). Not all studies reported an income multiplier, but the studies that did, reported an income multiplier between 1.4 and 2.8 (Roche et al., 2016; Gunter, 2011; Pesch, 2014). Gordon and Mulkey (1978) explain that income multipliers should be between 1.05 and 2.5 and that a multiplier over 2.5 is suspect.

Studies on how FTS programs affect farmers are limited both in number and in scope. Overall, sales to FTS programs seem limited, as previous studies have found that these sales represented just 1% to 5% of farmers’ overall sales (Conner et al., 2012; Izumi et al., 2010; Joshi et al., 2008). Despite the low sales, some farmers have found benefits in selling to schools, including market diversification and generating social benefits. Market diversification can include adding a market channel, identifying an outlet for small, visually imperfect, or otherwise unsold produce, while social benefits can include embedding farmers into the community, networking, and increased social capital (Conner et al., 2011). Barriers for increased sales are related to complex supply chain networks required for school delivery, the price sensitivity of schools, and the mismatch between the growing season and the school year (Becot et al., 2014; Conner et al., 2011).

As the studies point out, the economic impact of FTS local food procurement appears to be modest, particularly when studies account for wholesalers’ loss of economic activity due to schools purchasing directly from food producers. Only two of the studies highlighted above customized the agricultural sector in IMPLAN. Yet the IMPLAN model needs refinement because the expenditure patterns of farmers participating in local food system activities differ from the average farm sector in IMPLAN. These differences have bearings on the results of economic impact studies, as some impacts might be overstated or understated . However, access to the data needed to customize the model is difficult to obtain, and thus, restrains research in this area .

From the farmers’ perspective, sales to schools have been small as a proportion of all sales. Furthermore, limited information exists about how these sales impact farmers’ profitability in the short and long term. Social benefits seem to prevail in these transactions, and components of FTS programs such agricultural literacy and nutrition education might work to build a larger customer base in the long term . Though increased farm profitability has been touted as a benefit, the lack of knowledge about the interactions between sales to schools and profitability represents a research gap.

First, anecdotal evidence suggests that FTS programs lead to reduced food waste, representing a cost saving for schools (U.S. Department of Agriculture, 2016b). The reduction in food waste might be due to improved quality of meals served and increased awareness of the value of food through FTS class programming. Since the current evidence is anecdotal, future research is needed to explore the relationship among FTS programs, food waste, and food costs.

Second, focus on healthy diets and education through food and agricultural literacy leads to improved nutritional intake, which could ultimately lead to improved health outcomes among children (Joshi et al., 2008; Roche et al., 2012). Improved health outcomes, including reduced rates of obesity and weight-related illnesses, would likely lead to healthcare costs savings (Fung et al., 2012; Qian et al., 2016). If FTS programs lead to improved health outcomes—and given that better health leads to healthcare cost savings—economic impact modeling may show that these programs have a negative impact on the economy. However, despite potential losses for the healthcare industry, gains at the societal level would likely be greater. The impacts of FTS on health and the ensuing economic impacts are currently large research gaps.

Interest in better understanding the economic impact of FTS programs has increased as the resources available to these programs have grown. While this article focused on the economic impacts of FTS programs, the likely impacts of FTS programs go beyond economics. Beyond the health and nutritional outcomes highlighted above, advocates argue that FTS programs lead to increased food and agricultural literacy, environmental awareness, lunch participation, perceived value of food service workers, and connections between schools and the community (National Farm to School Network, 2016b; University of Minnesota Extension, 2016; Vermont FEED, n.d.). Research to explore these impacts has been limited so far, likely due to a lack of resources, but this research is crucial. Changes such as improved health and educational outcomes are long-term changes that require longitudinal studies. Many of the other potential changes listed above could be suited for qualitative research approaches. No matter the research methodologies employed, much work remains to be done to gain a holistic understanding of the impacts of FTS programs.

Bamford, K. 2015. “The Role of Motivation and Curriculum in Shaping Pro-Sustainable Attitudes and Behaviors in Students.” MS thesis, University of Vermont, Burlington.

Conner, D., B. King, J. Kolodinsky, E. Roche, C. Koliba, and A. Trubek. 2012. “You Can Know Your School and Feed It Too: Vermont Farmers’ Motivations and Distribution Practices in Direct Sales to School Food Services.” Agriculture and Human Values 29: 321–332.

National Farm to School Network. 2016a. About Farm to School. Available online: http://www.farmtoschool.org/about/what-is-farm-to-school

Watson, P., J. Wilson, D.D. Thilmany, and S. Winter. 2007. “Determining Economic Contributions and Impacts: What Is the Difference and Why Do We Care?” Journal of Regional Analysis and Policy 37: 140–146.