Importance of Perceived “Naturalness” to the Success of Urban Farming

Urban farming is the practice of growing, processing, and distributing food within city limits (Bailkey and Nasr, 1999)—for example, community gardening in vacant lots and parks (U.S. Department of Agriculture, National Agricultural Library, 2016; University of California, Urban Agriculture, 2016). Urban farming provides many benefits to consumers and their communities, including learning how to farm and enhancing ties among people in a neighborhood (U.S. Department of Agriculture, 2016). However, for urban farming to be successful, consumers need to prefer food products sold at urban farms over those sold at more traditional shopping outlets such as grocery stores. Why might consumers prefer food from one outlet over another?

In this regard, Rozin et al. (2004) and Rozin (2006) show that consumers prefer “natural” entities and believe that naturalness influences the health value of food (Siipi, 2013). In other words, consumers feel that natural food is healthy (Rozin et al., 2004; Rozin, 2005; Saher, 2006). At the same time, they believe that urban farms offer access not only to nature but also to organic food and that products sold at urban farms provide perceived health benefits (Kolodinsky and Pelch, 1997; Armstrong, 2000). Considering this, we test whether consumers prefer urban farms as shopping outlets because they perceive urban farming to be natural. Specifically, our aim is to examine consumer preferences for produce from urban farming while considering the perceived naturalness of production methods. Given that consumers tend to believe that urban farming uses organic production methods, we also examine consumers’ preferences for urban farming when organic production is perceived as natural.

Our findings are useful to farmers and marketers planning to grow and offer produce at urban farms. Knowledge about consumers who prefer food from urban farms enables stakeholders to market their products to those who are looking for them and develop target-oriented marketing and promotional activities. Our results will also allow us to identify consumers who do not yet prefer produce from urban farms but might be open to consider it when provided with more information.

To date, a number of food-related studies have examined the effect of “natural” on consumer willingness to pay and preferences. For example, Gifford and Bernard (2011) find that consumers are willing to pay significantly more for chicken labeled as “natural.” Similarly, Lusk and Schroeder (2004) show a higher willingness to pay for beef products with a “natural” label. Umberger, Thilmany McFadden, and Smith (2009) find that consumers prefer “natural” and regionally produced beef. They point out that these preferences are caused in part by the perception of personal benefits.

We extend the work by Umberger, Thilmany McFadden, and Smith (2009) by introducing “perceived naturalness” as a psychological construct that drives preferences for produce from various retailing outlets. In addition, we examine whether perceived naturalness influences preferences for produce from urban farms or if it is linked to organic production, since organic is often associated with a natural way of producing food (Davies, Titterington, and Cochrane, 1995; Harper and Makatouni, 2002). For example, Gifford and Bernard (2011) find a relationship between natural and organic, as do Rushing and Ruehle (2013), who state that one of the underlying reasons for increasing demand for organic and local food is the opportunity to purchase food options that are (perceived to be) more natural and healthier. Finally, given that consumers increasingly prefer locally produced food (Loureiro and Hine, 2002; Naspetti and Bodini, 2008; Costanigro et al., 2011; Meas et al., 2014), we test whether produce labeled as “local” will be preferred more by those consumers who are biased toward perceiving certain production methods as more natural compared to others.

What is Perceived Naturalness?

Most consumers prefer “natural” food that has been produced without synthetic or modified inputs (Rozin et al., 2004). This preference can be motivated by the combination of instrumental and ideational beliefs. Instrumental beliefs include the belief that natural is better because the product was not altered or created by people and because it is healthier, superior, and purer, making it safer for consumption. At the same time, ideational beliefs include the belief that natural is just better by default. Rozin (2006) suggests that the process that a certain food undergoes is the most important influencer of the judgment of naturalness. In our case, consumers might think that produce from urban farms is grown more naturally—for example, without the use of pesticides—whether that is true or not. If so, they might believe that this produce is healthier and consequently develop a preference for it. Furthermore, consumers might prefer produce from urban farms over produce sold at grocery stores because studies show an increasing uncertainty about the nutritional value of food produced by multinational firms (Adams and Salois, 2010).

Finally, an underlying reason for consumers’ positive perceptions and preferences for produce from urban farming may be the “halo effect,” which is a tendency to use an existing opinion about a person or an object to make additional assumptions and judgments about that person or object (Smith, Read, and López-Rodríguez, 2010). In the context of the current research, the halo effect is a process in which an initial perception about the way products are grown at urban farms (for example, being “pesticide free”) affects perceptions about other attributes of the products grown and/or produced at these venues, such as their naturalness, healthiness, and freshness. Based on this, we hypothesize that produce from urban farms might benefit from a halo effect and, therefore, will be more preferred by consumers. Furthermore, we hypothesize that perceiving urban farming as natural will enhance this effect, given that Rozin (2005) found that the production process of food has the greatest influence on consumers’ judgments of naturalness.

To test the influence of perceived naturalness on consumer preferences for produce from urban farms, we conducted an online survey in Spring 2016 that included 173 student participants. About 45% of the respondents were female, with an average household size of three and an average household income of $48,650. In order to simulate purchase decisions, we used a choice experiment in which participants were asked to choose a product (in this case, 1 pound of tomatoes) from a set of alternatives. This allows us to determine their preferences for certain product attributes. 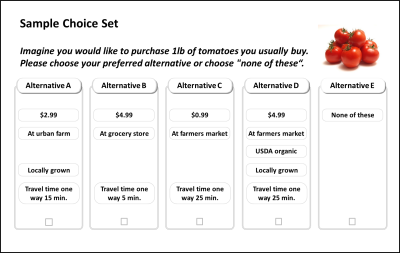 Our study included five attributes—price, local production, organic certification, retailing outlet, and distance to reach the outlet. The price attribute included three levels chosen based on current prices for fresh tomatoes. Since distance to reach the outlet is strongly related to food shopping convenience (e.g., Briesch, Chintagunta, and Fox, 2009), it was included in the study in terms of the time needed to travel to the store (but not to return from the store). A retailing outlet attribute reflected different venues where tomatoes can be purchased (grocery stores, farmers’ markets, and urban farms). Finally, organic or local production labels were either present or absent on the alternatives. Since no formal definition of local food is available to consumers (Onken, Bernard, and Pesek, Jr., 2011; Meas et al., 2014), we followed Lim and Hu (2013) and did not provide participants with a definition for “locally grown,” allowing them to use their own beliefs about what constitutes “local.” Figure 1 provides an example choice set. 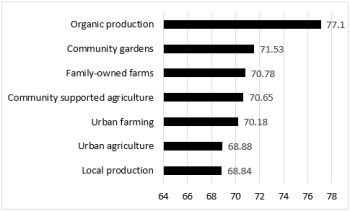 In order to measure perceived naturalness, we followed the approach used by Rozin (2005, 2006). Participants had to consider the naturalness of different ways of producing food and rate their naturalness on a scale from 0 (not natural at all, like a plastic toy model of a car) to 100 (completely natural, like a tree growing on a mountain peak that has never been visited by humans). We included seven production methods: (i) organic production, (ii) local production, (iii) community gardens, (iv) family-owned farms, (v) community supported agriculture (CSA); (vi) urban farming, and (vii) urban agriculture.

A number of findings are consistent across models. For example, consumers are less likely to prefer tomatoes from an urban farm compared to tomatoes from the grocery store, but they do not have a significantly different preference for tomatoes sold at the farmers’ market. This could be because consumers expect to get a better value for their money when shopping at the grocery store.

Though there are not many differences between the models based on the Perceived Naturalness Index, one substantial difference in consumer preferences becomes evident in the last four models, which compare participants’ perceived naturalness of organic production and urban farming. The results suggest that consumers who strongly perceive organic production and urban farming to be natural have a significant and positive preference for local tomatoes. On the other hand, participants who weakly perceive those production methods to be natural do not differentiate between local and non-local tomatoes. One explanation for this could be that consumers who strongly perceive organic production to be natural might believe that local food possesses the benefits of organic production (Naspetti and Bodini, 2008; Onozaka, Nurse, and Thilmany McFadden, 2010). Another explanation might be that consumers who strongly perceive urban farming to be natural believe that food labeled as local comes from farms located within city limits. This seems to be supported by the fact that—even though an official USDA definition is available of what constitutes organic food—there is still no official definition of local food (Onken, Bernard, and Pesek, Jr., 2011; Meas et al., 2014).

Urban farming is the latest movement in food production, transforming vacant lots in cities into agricultural landscapes. However, for urban farming to be successful, consumers have to prefer it as a source of produce over other retail outlets. This research investigated consumer preferences for tomatoes sold at different retail outlets while considering perceived naturalness of production methods. Our findings can provide insight for farmers and marketers when developing a pricing strategy for their products or identifying their target market. More specifically, our research highlights one of the motivations for buying local food from urban farms—perceived naturalness.

What becomes evident from our results is that, on average, consumers with strong or weak perceptions about naturalness do not vary much in their preferences. However, we do find that consumers who perceive organic production and urban farming to be natural have strong preferences for local food, suggesting that urban farms might benefit greatly by catering to consumers with high interest in organic production and those who consider urban farms to be a natural way of producing food.

Future studies might investigate how perceived naturalness affects consumers’ willingness to pay for local food. Also, future research could test whether consumer preferences as they relate to perceived naturalness differ between various types of local food products, such as processed and unprocessed food or produce and animal products such as dairy, eggs, and meat. Finally, future research could study how the actual retail outlet influences preferences of consumers for choosing locally produced food. This seems a promising avenue for research given that previous literature (Ellison et al., 2016a; Ellison et al., 2016b) has identified that retailing venues have a significant effect on consumer perceptions and willingness to pay for organic food.

Ellison, B., J. C. Bernard, M. Paukett, and U. C. Toensmeyer. 2016a. “The Influence of Retail Outlet and FSMA Information on Consumer Perceptions of and Willingness to Pay for Organic Grape Tomatoes.” Journal of Economic Psychology 55: 109–119.

Ellison, B., B. R. Duff, Z. Wang, and T. B. White 2016b. “Putting the Organic Label in Context: Examining the Interactions between the Organic Label, Product Type, and Retail Outlet.” Food Quality and Preference 49: 140–150.

Gifford, K., and J. C. Bernard. 2011. “The Effect of Information on Consumers' Willingness to Pay for Natural and Organic Chicken.” International Journal of Consumer Studies 35: 282–289.

Naspetti, S., and A. Bodini. 2008. “Consumer Perception of Local and Organic Products: Substitution or Complementary Goods?” The International Journal of Interdisciplinary Social Sciences 3: 111–122.

Umberger, W. J., D. D. Thilmany McFadden, and A. R. Smith. 2009. “Does Altruism Play a Role in Determining US Consumer Preferences and Willingness to Pay for Natural and Regionally Produced Beef?” Agribusiness 25: 268–285.