After Long Argument, Then Compromise, Congress Agrees on Nutrition Assistance Benefit Cuts in the Agricultural Act of 2014

The Agricultural Act of 2014—better known as the farm bill—passed both houses of Congress only after lawmakers compromised in their long and bitter argument over the future of nutrition assistance programs for low-income Americans. The House of Representatives in 2013 passed a bill with nutrition program cuts of almost $40 billion over 10 years. The Senate passed a bill with much smaller nutrition program cuts of approximately $4 billion over the same period. The compromise signed into law in February 2014 included an intermediate net reduction of more than $8 billion to nutrition assistance programs, accounting for about half of the total budget savings in the law.

The Agricultural Act of 2014 is an “omnibus” —or multi-purpose—law that authorizes major U.S. agriculture, conservation, and crop insurance programs, in addition to nutrition assistance. The nutrition assistance programs receive four-fifths of all spending. The largest such program, the Supplemental Nutrition Assistance Program (SNAP), or food stamps, in 2013 provided food resources to 47.6 million low-income Americans per month at a cost of $80 billion per year. Participants received benefits through an electronic benefit transfer (EBT) card that could be used like a debit card to purchase eligible food and non-alcoholic beverages from food retailers. SNAP benefits start at a maximum level for the very poorest households, and benefits are lowered for households that have some income. The average monthly benefit in 2013 was $133 per person (U.S. Department of Agriculture (USDA) Food and Nutrition Service, 2014).

SNAP is a “mandatory” or entitlement program which means that Congress commits to providing sufficient funds for however many low-income Americans apply for benefits and provide proof of eligibility under current rules. Hence, there are no waiting lists for SNAP benefits as there are when annual funding runs out for non-entitlement safety net programs such as housing assistance. Being a mandatory program influences the nature of SNAP debates in Congress. Rather than proposing a specific dollar amount to cut, legislators may propose changes to eligibility rules or benefit levels. Then the Congressional Budget Office (CBO) —a non-partisan office that reports to Congress—provides an official estimate of the resulting budget cut in terms of dollars.

Voting on the Nutrition Title

In previous farm bills, Congress sharply debated regional and commodity-specific concerns with comparatively little partisanship. For the 2014 farm bill, however, the nutrition provisions generated a more harshly partisan debate. The Speaker of the House and his deputies had to balance the proposals of the Committee on Agriculture—which previously had decisive influence over the farm bill—against new pressure from the Republican majority to enact deeper cuts to SNAP to achieve more rapid deficit reduction. In the Senate, by contrast, the Democratic leadership sought to protect the nation’s largest anti-hunger program from such deep cuts.

In early 2013, leaders from both parties on the House Committee on Agriculture hammered out an agreement that included approximately $20 billion in SNAP cuts over 10 years. Many House members who were not on the Agriculture Committee insisted on a more rapid deficit reduction. In a major shock for U.S. agricultural policy in June, the full House of Representatives rejected the committee-supported bill. In late summer 2013, the House passed an agriculture-only bill, without Democratic support. In September, the House passed a separate bill, reauthorizing SNAP but cutting the program by $40 billion over 10 years, again without Democratic support. These House bills nearly ended the practice, which dated to the 1970s, of combining farm programs and nutrition assistance in a single omnibus bill to win bipartisan political support from both farm-state and urban legislators.

In fall 2013, conferees from the House met with their counterparts from the Senate, which had passed a bill with SNAP cuts only one-tenth as large, to work out their differences. In January 2014, the conferees recommended SNAP cuts of $8 billion over 10 years, which is the compromise that finally became law. The conferees re-attached the nutrition provisions to the remainder of the farm bill. This combined bill passed the House of Representatives on January 29, 2014, with support from 162 Republicans and 89 Democrats. Opponents included 63 Republicans and 103 Democrats.

The farm bill passed the Senate on February 4, 2014, with support from 22 Republicans and 44 Democrats. Opponents, including 23 Republicans and 9 Democrats, had diametrically opposed motivations. For example, Sen. Jeff Sessions (R-AL) said, “I remain concerned that the reforms to the SNAP program, the food stamp program, are much too modest” (Kasperowicz, 2014). On the other side of the aisle, Sen. Elizabeth Warren (D-MA) said, “There are important provisions in the farm bill, but I cannot support legislation that further slashes the SNAP program” (Warren, 2014).

In the end, the nutrition title remained part of the Agricultural Act of 2014 with bipartisan support, much as in earlier farm bills from the 1970s onward. However, partisan identity was far more prominent in the fierce Congressional debate, which delayed passage of the farm bill by more than a year. Despite the final passage, the coalition that favors including a nutrition title in the farm bill appeared more fragile than ever before.

Several Types of SNAP Cuts Were Proposed in 2013

In 2013 farm bill discussions, legislators proposed several major and minor changes to SNAP eligibility rules and benefit levels. Two of these proposals turned out to be most important: 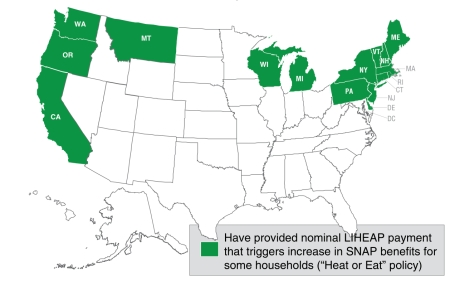 The impact of this latter change was distributed unevenly across states and households. Some states previously had provided many SNAP households with small amounts of energy assistance through the Low-Income Energy Assistance Program (LIHEAP), which allowed participants to take an energy-related deduction in the official computation of their income for SNAP. This deduction, in turn, allowed these households to receive a higher SNAP benefit. By changing the rules so that small amounts of LIHEAP assistance no longer triggered a deduction, Congress effectively reduced SNAP benefits. The reduction was concentrated in a comparatively small group of households, amounting to 3.7% of SNAP participants. While these households would have experienced a large benefit cut—approximately $90 per household per month on average—no SNAP participants would have been kicked out of the program. The states that had previously provided small amounts of energy assistance were located in the Northeast, the Upper Midwest, and the West, so SNAP participants in these states took the full brunt of this cut (Figure 1).

In addition to the cuts proposed in the 2014 bill, SNAP participants also recently experienced benefit cuts through a different mechanism. In most years, the maximum SNAP benefit is set equal to 100% of the Thrifty Food Plan, which is an official benchmark monthly food budget. In response to the financial crisis of the late 2000s and the Great Recession, the federal government had temporarily increased the maximum SNAP benefit to approximately 113% of the Thrifty Food Plan, noting that SNAP benefits offered a direct way to stimulate the retail economy. This temporary boost was partly whittled away by inflation over the subsequent several years, so that by October 2013, the maximum benefit was 106% of the Thrifty Food Plan. The last part of the boost was halted at the end of October 2013, resulting in a federal budget savings of approximately $5 billion per year.

Other Changes to Nutrition Assistance

The Agricultural Act of 2014 makes several other, smaller changes to nutrition assistance programs (Bolen, Rosenbaum, and Dean, 2014). For example, the new law tightens SNAP administration by making sure that program administrators find out quickly if a SNAP participant wins a lottery and by requiring SNAP participants who lose their EBT card multiple times to provide a formal explanation. These changes are minor, but they reflect the determination of legislators to respond to public concerns about program participation by ineligible people and about misuse of program benefits to purchase ineligible goods.

Some new funding was provided for pilot projects to explore potential changes in program design for nutrition assistance programs. One type of pilot seeks to reduce long-term program dependency and increase work requirements. Another type of pilot aims to promote fruit and vegetable intake, along the lines of “Bounty Bucks” programs that encourage SNAP spending in farmers’ markets (Hesterman, 2014) or the recent Healthy Incentive Pilot (HIP) that subsidized fruits and vegetables in ordinary food retailers (Bartlett et al., 2013). The law permits SNAP nutrition education efforts to include physical activity promotion along with healthy food messages.

Finally, the Agricultural Act of 2014 reauthorizes The Emergency Food Assistance Program (TEFAP), the Food Distribution Program on Indian Reservations (FDPIR), and special nutrition assistance programs for U.S. territories and Puerto Rico (Bolen, Rosenbaum, and Dean, 2014). The law requires a review of a cash assistance component to the Puerto Rico program, indicating that the program, in the future, could be converted entirely to an in-kind program such as SNAP.

Beyond the nutrition programs in the Agricultural Act of 2014, other major U.S. nutrition assistance programs include school meal programs and the Special Supplemental Nutrition Program for Women, Infants, and Children (WIC). These programs were reauthorized for five years in a different law—the Healthy, Hunger-Free Kids Act of 2010.

Empirical research provides important information about program operations and impacts, which has sometimes been used in designing policy changes. One line of research has explored the determinants of program caseload changes, especially the causes of the rapid caseload increases from 2007 onward, which formed the backdrop to the most intense recent policy arguments. The most recent research in this tradition has estimated that macroeconomic factors associated with the Great Recession explained nearly 50% of the caseload increase from 2007-2011, and policy changes such as the temporary boost to benefits explained nearly 30% of the caseload increase (Ziliak, 2013). As usual in such models, some of the caseload change remained unexplained.

Another active field of research evaluates nutrition assistance programs and explores options for improving them. Measuring program impacts is difficult because participation is voluntary. A difference in outcomes between SNAP participants and nonparticipants could represent a program impact, but, just as plausibly, it could represent some other factor that differed between the two groups (Wilde, 2013).

Researchers have used several promising strategies to address this challenge. Some research has used statistical models, called instrumental variables models, which give special attention to independent factors—such as a diversity of state-level administrative rules—that influence a household’s program participation decision (Ratcliffe, McKernan, and Zhang, 2011). This research estimated that receipt of SNAP benefits makes it 30% less likely that a household will experience “food insecurity,” a condition of food-related hardship.

Other research has taken advantage of a “natural experiment,” when there is a major policy change. USDA research focused on the temporary boost to SNAP benefits after 2007 and then the subsequent decline in the real value of this boost. The research found that the recent decline in the value of SNAP benefits increased the condition of “very low food security” —another measure of food-related hardship—by 16.5% (Nord et al., 2013).

A random assignment research design—in which participants are randomly assigned either to participate or not participate in a program—is considered the “gold standard” in program evaluation research, but, of course, it would be unethical to deny some people access to benefits simply to see if they go hungry. An alternative approach would be to randomly assign SNAP benefits to some people who currently are ineligible—perhaps because their income is just barely too high—to see the impact of the additional benefits. At present, random assignment research designs are being used in studies of new program innovations to promote healthy eating (Bartlett et al., 2013), but not for basic program features such as eligibility rules or the benefit amount.

Ziliak, J. (2013). Why are so many Americans on food stamps? The role of the economy, policy, and demographics. Institute for Research on Poverty Discussion Paper No. 1414-13.