Crop Insurance in the Agricultural Act of 2014

Through a long and sometimes contentious farm bill debate that began in 2011 and did not end until 2014, there was near unanimous agreement that producer support must be justified by risk mitigation. The most obvious example was the ending of the non-risk responsive direct payments and the sizeable expansion of crop insurance programs with a funding increase of $5.72 billion over the baseline. This article provides an overview of the new crop insurance programs as well as changes to existing provisions as contained in the Agricultural Act of 2014. In addition, the article provides a discussion of some of the complex interactions between new crop insurance programs and commodity program decisions.

Overall, the basic underlying crop insurance policies (and subsidy levels) that were in place prior to the 2014 Act remain essentially unchanged. Arguably, the most dramatic, new change in the crop insurance arena was the creation of two area-triggered supplemental insurance products, including the Supplemental Coverage Option (SCO) and the Stacked Income Protection Plan (STAX). However, STAX is only available to upland cotton producers.

Another somewhat complex feature of the 2014 Act is the interaction between Title I commodity programs and SCO enrollment. More specific details are provided in the first article in this series (i.e. commodity programs) but it is important to mention them briefly in this article. Producers and landowners have the option to choose between farm-level Agriculture Risk Coverage (ARC), county-level ARC, and Price Loss Coverage (PLC) for covered commodities (upland cotton is no longer a covered commodity and cotton base acres cannot be enrolled in ARC or PLC). Enrollment in ARC or PLC will be a one-time, irrevocable decision beginning with the 2014 crop year. Producers could also choose not to enroll in any commodity program. Farms enrolled in farm-level or county-level ARC will not be eligible for SCO (and STAX is only available for planted cotton acreage). It is important to note that ARC and PLC are tied to historical base acres, while traditional crop insurance and SCO are tied to planted acres. So a producer could receive ARC or PLC payments for one crop (i.e. the crop with base acres), but actually be planting a different crop. Producers can enroll in ARC or PLC for the 2014 crop year (and beyond), but SCO and STAX will not be available until at least the 2015 crop year.

The SCO and STAX programs are similar to the preexisting Area Risk Protection Insurance (ARPI) policy. Coverage under these programs is based on the experience of the county rather than an individual farm. Producers would pay a premium and receive indemnity payments when the county suffers a loss. Producers will be able to purchase both an individual insurance policy to cover farm level losses and STAX/SCO (starting with the 2015 crop year) to provide greater risk protection. It is important to note that area-triggered programs such as STAX and SCO will likely not be perfectly correlated with farm-level losses. This is largely due to imperfect correlation between farm and county yield and is analogous to basis risk between cash and futures prices. As a result, a producer may receive a SCO or STAX indemnity but may not receive an indemnity from his or her individual policy (or vice versa). While STAX and SCO are very similar, a few key differences exist between the two programs.

Table 1. Comparison of STAX and SCO

As shown in Table 1, an individual insurance policy is required with SCO, but not with STAX. A producer can purchase STAX as a stand-alone policy or in addition to an individual policy. If a producer purchases SCO, it will take the form of an individual policy. For example, if the producer’s individual insurance policy is a yield protection (YP) policy, then SCO will also be a YP policy. Alternatively, if the producer’s individual insurance policy is a revenue protection (RP) policy, then SCO will be a RP policy. STAX always takes the form of an RP policy with upside price protection. STAX covers losses between 10% and 30% of expected county revenue, offered in increments of 5%. STAX is subsidized at 80%, so producers would pay 20% of the premium. With STAX, producers also have the option to select a payment rate multiplier of up to 120% which would increase the amount of protection per acre.

With SCO, coverage ranges from 86% of expected county revenue minus the coverage level of the individual insurance policy. So, if a producer has a 70% RP policy, then the maximum amount of SCO coverage available is 16% (86% to 70%). The premium subsidy for SCO is 65%, so producers would pay 35% of the premium. Cotton producers may purchase both SCO and STAX, but not on the same acres.

Interactions between Commodity Programs and SCO

Many producers of covered commodities will likely choose to either enroll in ARC or in PLC and purchase SCO. ARC provides revenue protection. PLC provides price protection. SCO provides revenue or yield protection, depending on the individual policy. Since SCO is not available for the 2014 crop year, the decision to enroll in PLC over ARC may be more difficult since PLC only protects against price declines. The Food and Agricultural Policy Research Institute at the University of Missouri (FAPRI MU) estimates that over 60% of soybean and 50% of corn base acres will be enrolled in ARC, while 70% or more of the other crop base acres will be enrolled in PLC (FAPRI-MU, 2014). The PLC reference price for some crops is much lower than the expected price, meaning that PLC could be less likely to trigger a payment than ARC. For example, producers with corn or soybean base may have an initial incentive to select ARC since a substantial price drop would be required in most years for PLC payments to exceed ARC payments over the projected life of the farm bill.

By contrast, in the Great Plains, producers in many counties do not generally purchase crop insurance at coverage levels above 75% (it is either not offered or is too expensive), so SCO could potentially provide more coverage. Also, planted acres do not have to follow base, and there is significant crop diversity in the Great Plains and elsewhere, which means that PLC/SCO might be a more attractive option for some producers. For example, if a producer plants sorghum on wheat base, s/he could reduce traditional crop insurance to a low level (say 50%) and purchase the maximum SCO coverage (the difference between 50% and 86%). Remember, the program decision (ARC vs. PLC) may have little to do with the actual planting decisions. The only connection appears to be that crops enrolled in ARC on a particular farm number would not be eligible for SCO. Therefore, enrollment in PLC provides greater flexibility on the insurance side between farm-level coverage and area coverage. This is especially true for those situations where higher levels of traditional crop insurance coverage are not offered, or where premiums for traditional crop insurance are very high. Finally, since SCO is an insurance product, there is no limit on SCO payments, perhaps making it an attractive choice for those producers concerned about payment limits. However, some details regarding how the guarantees are calculated, and  how the premiums will be calculated, are not known at this time and may not be fully known by the time some producers  have to make these decisions (depending on when signup occurs relative to when producers have to make crop insurance decisions).

Given the popularity of enterprise units, the first two changes are likely to make enterprise units even more attractive. The Act also includes language encouraging the Risk Management Agency (RMA) to develop or approve a peanut revenue insurance product by 2015. The Act mandates that RMA provide organic price elections by 2015 and that two or more weather-index pilots be allowed. Finally, the bill gives RMA the authority to provide crop margin insurance that covers the difference between an index of input prices and output revenue.

The “sod-saver provisions” in the bill are included to reduce the incentive to farm fragile lands. These provisions reduce crop insurance subsidies and noninsured crop disaster assistance for the first four years of planting on native sod acreage in a pilot region of Minnesota, Iowa, North Dakota, South Dakota, Montana, and Nebraska.

Table 2. Crop Insurance Subsidy Percentages under the Agricultural Act of 2014 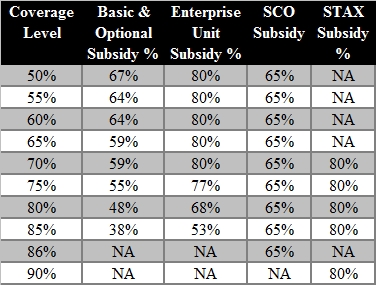 Finally, $10 million in each of fiscal years 2014 through 2018 is authorized for the USDA RMA  to conduct two or more pilot programs to provide financial assistance for producers of underserved crops and livestock (including specialty crops) to purchase an index-based weather insurance product from a private insurance company. The Corporation may pay a portion of the premium, but not in excess of 60%.

The Agricultural Act of 2014 clearly makes crop insurance an increasingly important component of the federal safety net for crop farms. Additional resources were added and new programs were created. Ultimately, area-triggered, shallow-loss programs that can layer on top of individual coverage crop insurance is the big new design proposed in the Act. However, the Act clearly directs USDA to pursue expansion of crop insurance programs to specialty crops, livestock insurance, and other commodities that have in the past been deemed difficult to insure. It is expected that several pilots and new products will be released during the life of this Act.