The Agricultural Act of 2014 offers new programs and more choices than ever before (Chite, 2014). In previous farm bills, the decisions to participate in various commodity and crop insurance programs were not necessarily intertwined. However, with an ever-increasing focus on risk management and a strong emphasis on crop insurance, the Act introduces new interactions between commodity and crop insurance programs. Direct payments provided to crop producers regardless of financial loss in the three previous farm bills are gone (with the exception of a reduced payment on the cotton base).

To effectively manage risk in their operations, producers may want to consider analyzing their entire farm and risk management “portfolio” which would include projected market revenue, farm commodity payments, and crop insurance indemnities. Enrollment in the new commodity programs will be a one-time, irrevocable decision in 2014 or early 2015 so it is important for producers to determine the mix of programs that offers the most effective safety net over the next four to five years versus the program with the largest government payment in a particular year. Unlike the Average Crop Revenue Election (ACRE) program in the 2008 farm bill where payments were tied to planted acres of covered commodities (up to the number of base acres), the new commodity programs are paid on base acres of covered commodities. Covered commodities include wheat, oats, barley, corn, grain sorghum, long grain rice, medium grain rice, pulse crops, soybeans, other oilseeds and peanuts. Upland cotton is no longer a covered commodity and is provided a safety net consisting of a reduced direct payment, called a transition payment, in 2014 (and possibly 2015), marketing loan support, and an area-wide revenue insurance program. 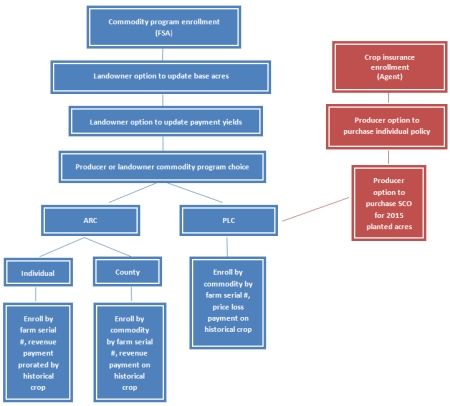 For the payment yield update, the updated yield will be equal to 90% of the average yield per planted acre of the covered commodity for the 2008-2012 crop years. Historical payment yields (as opposed to actual yields) are used to calculate PLC payments.

The county ARC guarantee is equal to 86% of the previous five-year Olympic average marketing year price (drop the highest and lowest) times the previous five-year Olympic average county yield. If any of the five-year prices are below the PLC reference prices, a “reference price” will replace it in the calculation. Reference prices set by Congress in the 2014 Act are listed in Table 1. County T-yields are used in a similar fashion to replace low county yields in the calculation. The actual county revenue is the actual marketing year average price multiplied by the actual county yield. The farm-level ARC calculation includes all covered commodities planted on the FSA farm and considers the producer’s share of all farms where he has an interest. The benchmark revenue for farm-level ARC is calculated as the five-year Olympic average of the sum of the revenues (yield times price) for all covered commodities on the farm using actual planted acres of the covered commodities.

Although, the PLC program is very similar to the counter-cyclical payment (CCP) program in the 2008 farm bill, it includes new reference prices that are significantly higher than the target prices in the 2008 farm bill (Table 1). If the effective price, which is the higher of the national average marketing year price or the loan rate, falls below the reference price, a PLC payment will be issued. The PLC payment rate equals the reference price minus the effective price. A producer’s PLC payment is equal to the payment rate times the payment yield times 85% times base acres for the crop. It is possible that if the price drops below the reference price and yields are at normal levels, PLC could result in a higher payment than ARC in a given year, especially when tied to the new SCO program.

Producers of covered commodities who elect PLC also will have the option to enroll in a new supplemental crop insurance program, called SCO. SCO is designed to cover the difference between 86% and the level of coverage of the producer’s individual insurance policy. Producers who elect ARC will not be able to enroll in the SCO program. Although not eligible for PLC, planted cotton acreage can also be enrolled in the SCO program.  SCO is designed as a shallow-loss insurance program that covers county-wide losses and complements a producer’s individual insurance policy.  For SCO, producers are required to purchase an individual insurance policy such as a revenue protection (RP) or yield protection (YP) insurance policy. SCO takes on the characteristics of the underlying insurance policy meaning that if YP is the underlying policy then SCO would be yield protection only. The same would hold true if the underlying policy were RP.  This is a new concept because producers have not previously been allowed to stack insurance policies for the same crop. However, SCO will not be available until the 2015 crop year which further adds to the complexity of the 2014 commodity program enrollment decision.  SCO premiums are subsidized at 65% by USDA.

A similar area-wide supplemental crop insurance program, called the Stacked Income Protection Plan (STAX), will be available only to upland cotton producers starting in 2015 (Campiche, 2013). The premium subsidy for STAX is 80%. To further complicate the decision process, producers who purchase SCO or STAX can choose different coverage levels which correspond with the coverage level of their individual policy. Since overlap is not allowed, SCO/STAX coverage is limited by the coverage level of the producer’s individual policy. However, it is important to note that these are area plans which cover county losses as opposed to losses on the individual farm. In many cases, farm APH yields may be higher than the county yields. A producer may have a loss on the farm but not receive a payment if the county does not also have a loss. This also works the other way too, so a producer could receive an indemnity payment when no loss occurs on the farm but the county does have a loss. 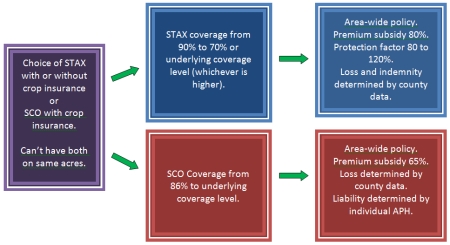 The 2014 farm bill includes major changes to the producer safety provided to crop producers. Direct payments that have been a key component of the producer safety net since 1996 have been eliminated as have Counter-Cyclical Program payments available since 2002. Crop producers and landowners have several decisions to make when USDA-FSA announces signup later this year. Initially, they will need to decide whether they want to reallocate their base acres which would serve to more closely align base acres to recent plantings. The major decision is whether they want to choose farm-level ARC, county-level ARC, or PLC.

Since this decision will stay with the farm for the life of the farm bill, producers are encouraged to consider which choice they feel the most comfortable with over the next five years rather than which might provide a short-term payment. Each producer will need to make this decision for every covered commodity grown on each farm. Once this decision is made, payment yields can be updated for any commodity enrolled in PLC.

While these decisions may seem daunting for even an average size farm, it is important to note that the safety net provided in this farm bill can be especially strong if producers will take the time to tailor their farm program choices to each of their farms. Once these decisions are made, there are several crop insurance changes that will also need to be considered.

Jody Campiche (jody.campiche@okstate.edu) is Assistant Professor and Extension Economist in the Department of Agricultural Economics at Oklahoma State University, Stillwater.

Joe Outlaw (joutlaw@tamu.edu) is Professor and Extension Economist in the Department of Agricultural Economics at Texas A&M University, College Station.