The Dairy Subtitle of the Agricultural Act of 2014

The Agricultural Act of 2014 (AA2014) was signed into law on February 7. The essence of the new dairy safety net began with the formation of a task force to rewrite dairy policy created by the National Milk Producers Federation in June 2009. Its plan included a "margin insurance" program that is little altered in the new Margin Protection Plan (MPP) for dairy producers, and which is the centerpiece of the new farm bill’s dairy subtitle. It also contained a Dairy Market Stabilization Plan (DMSP) that would become the focal point for controversy and fierce political debate and maneuvering literally up to the final moments of agreeing to the Conference Committee compromise that became the new farm bill.

Over two months of hard-fought and even bitter conference debate, the dairy title remained a sticking point. Literally last-minute efforts were made to come up with alternatives that found some political solutions that didn't involve a DMSP. In the end, a kind of demand stimulation program was added instead of domestic supply controls. This is called the Dairy Product Donation Program (DPDP).

The dairy provisions are explained in some detail below. Readers are cautioned that there are aspects of the new dairy programs that cannot be fully explained until the U.S. Department of Agriculture (USDA) completes the process of writing regulations that interpret the legislative language of AA2014.

Connections to the Previous Farm Bill

The dairy provisions of AA2014 were first and foremost intended to replace the safety net provisions of existing law. The Dairy Product Price Support Program (DPPSP) was terminated immediately, though the permanent Dairy Price Support Program contained in the 1949 Agricultural Act was retained but suspended for the duration of the new farm bill. The Milk Income Loss Contract (MILC) of the 2008 farm bill will be terminated once the new Margin Protection Program (MPP) becomes operational or on September 1, 2014, whichever is earlier. And, finally, the Dairy Export Incentive Program (DEIP) was immediately terminated. The DPPSP and DEIP were seldom-used programs and the industry won’t feel their loss. However, MILC was active as a counter-cyclical payment program for dairy producers over its life.

Specific Other Authorities from The 2008 Farm Bill Continue

The dairy indemnity program also persists. This program potentially provides payments to dairy producers in the unlikely event that a public regulatory agency directs them to remove their raw milk from the commercial market because it has been contaminated by pesticides, nuclear radiation or fallout, or toxic substances and chemical residues other than pesticides.

Certain other provisions to augment the development of export markets under the National Dairy Promotion and Research Program are retained. The authority to promulgate a FMMO that covers the state of California, and could allow it to retain its current quota plan, is reinstated if a legitimate hearing request is made.

The farm bill creates a new safety net for dairy producers. A new Margin Protection Plan (MPP) is offered to producers. However, they must choose between the new MPP or the Livestock Gross Margin for Dairy (LGM-D) that has been available for several years. Producers cannot participate in LGM-D after enrolling in the new MPP program. 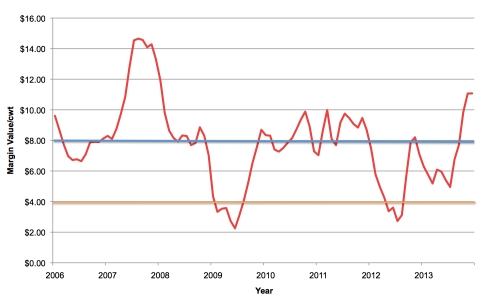 The new MPP contains several basic elements that combine to determine how, when, and how much in payments dairy farmers can receive in periods of financial stress. The Actual Dairy Production Margin (ADPM) is determined as the difference between the national average price for all milk and the cost of three feeds that represent the bulk of feed purchased for dairy cattle—corn, soybean meal, and alfalfa hay. The feed costs are intended to represent 90% of the dairy ration that would be consistent with recommended nutrition to produce 100 pounds (cwt.) of milk including the dairy cow and the herd complement of dry cows, hospital cows, and young stock at average U.S. milk yield per cow. The ADPM will be calculated monthly but, for almost all applications in the Act, triggering events are based on a two-month average for consecutive pairs of months in the calendar year, i.e. January/February, March/April, May/June, and so on.

The MPP functions as an insurance program where the degree of protection is chosen by individual producers who pay a premium cost. They will receive an indemnity payment if the two-month average ADPM falls below their chosen level of protection. The MPP does not guarantee an individual producer's margin. It is assumed that each producer's margin will vary in a way that correlates with the national calculation. 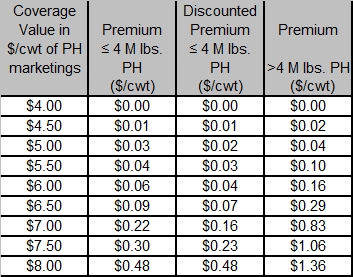 Once a year, producers will be able to choose the percentage of their production history they wish to cover and at what margin level. Producers may choose to cover no less that 25% of their production history, no more than 90%, or points in between in 5% intervals. Farmers may elect ADPM coverage in 50¢/cwt. increments from $4.00 to $8.00/cwt. The quantity of milk covered at the selected ADPM coverage will determine the total annual premium cost. Participants must pay an annual administrative fee of $100.

Conditions that will trigger an indemnity payment are calculated in two-month intervals. The calendar year is divided into six periods consisting of consecutive pairs of months: January/February, March/April, May/June, July/August, September/October, and November/December. When an indemnity is triggered, producers will receive a compensating payment on the qualifying amount of milk.

Although the Act does not specify a "marketing year" for the MPP, one could assume that USDA will plan it as a fiscal-year program, as was the case for MILC. However, there are several places in the farm bill’s language which refer to a calendar year and USDA may conclude that to be the Congressional intent for the marketing year.

At any time that the ADPH is below $4/cwt. in each of two successive months, the Secretary of Agriculture must announce and implement the DPDP. Under this program, the Secretary must:

The program provides an arguably good use for dairy products, but its potential impact on demand and price is not entirely clear. One basic question is how often this program will trigger. The $4 action trigger represents a very low margin. Since 2000, there have only been 10 months, limited to two years, when the new margin has hit that level or lower.

The bill has entry and exit rules for when the donation program operates, but there is no quantity or performance target as to how aggressively the program should operate. It is entirely possible that the program could be too anemic to have much impact on market prices.

Another fundamental question is whether or not the end-users of donated products would have purchased them on commercial markets anyway. To the extent that these donations are going to programs that have limited resources and continuously unmet needs, it is not unreasonable to speculate that commercial displacement will be minimal.

While the new dairy title was designed in good faith and with great attention to detail, there are still many issues that will not be addressed until USDA finishes writing the implementation regulations. After the MPP has been in operation, some unintended consequences may still occur. Some of those are:

The dairy subtitle of the new AA2014 offers a total revamping of the safety nets that have been in place for the dairy sector going back to the middle of the 20th century. The MPP might be considered a variation of the counter-cyclical payments (MILC) that began in 2002, but it is notably different in two important ways. First, it substitutes Milk Income Over Feed Costs for farm milk prices as the measure by which we economically evaluate market conditions and support dairy farms. Second, it does not restrict eligibility for the program by farm size. Larger farms have to pay a higher premium, but they are not categorically limited in participation.

Advocates of a new approach argued that the limitations of existing programs were vividly revealed during the horrible economic events of 2009, and repeated for different reasons in 2012. Hence, they argued, bold new programs are needed. Whether the new programs proposed will prove to be the answer farmers seek is something that will be debated and estimated, but we won't really know unless and until they are tried.

Mark W. Stephenson (mwstephenson@wisc.edu) is the Director of Dairy Policy Analysis at the University of Wisconsin, Madison.
Andrew M. Novakovic (a.novakovic@cornell.edu) is the E.V. Baker Professor of Agricultural Economics in the Charles H. Dyson School of Applied Economics and Management at Cornell University, Ithaca, NY.