In 2017, the United States imported approximately $506 billion in products from China and exported over $130 billion to China, leaving the United States with a $375 billion trade deficit (U.S. Census Bureau, 2017). With the goal of reducing the trade deficit, the Trump administration proposed and implemented a series of tariffs on products imported from China, which led to retaliatory actions by the Chinese government.

On March 23, 2018, President Trump signed an order to impose non-country-specific tariffs, with 25% tariffs on steel and 10% tariffs on aluminum. By the end of March 2018, several countries, not including China, had been granted exemptions (Shurley, 2018b). In response, on April 2, China suspended tariff reduction obligations on 128 products of U.S. origin, including an additional 25% tariff on pork and an additional 15% tariff on fruits, nuts, wine, ginseng, and ethanol, effective immediately (Inouye, 2018). Roughly $2 billion of U.S. agricultural exports to China will be impacted. On April 3, the United States formally proposed $50 billion worth of 25% tariffs on 1,333 Chinese products. China responded on the next day by announcing $50 billion worth of tariffs on 106 U.S. products, without specifying the effective date of implementation. The agricultural products on this list are worth approximately $16.5 billion of U.S. exports to China (USDA, 2018a), which might face an additional 25% tariff. This list covers the major agricultural products that the United States exports to China, including cotton (USDA, 2018a), the second-highest U.S. export by total value, after soybeans (USDA, 2018c). 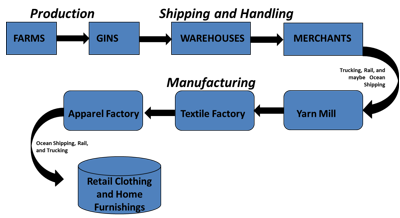 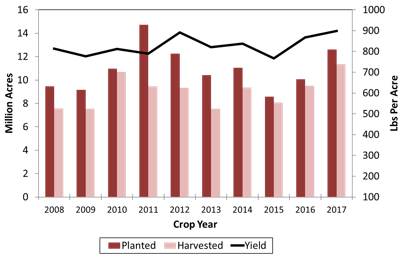 The global cotton supply chain is very complex (Figure 1). It transforms raw cotton material into the final products of retail clothing, home furnishings, and other products. The supply chain starts with picking the cotton boll and ginning to separate cotton lint and seed. Merchants or traders then buy cotton in bales and sell them to mills in the global markets. Spinners and yarn mills use a mixture of cotton and other fibers to produce yarn and fabric. A textile factory then converts the fabric into the final products and supplies the apparel and other industries. The retail industry distributes and sells the final products to consumers.

American Upland cotton and American Pima cotton are two cotton species grown in the United States. While Pima cotton is primarily grown in California and Arizona (USDA, 2017), Upland cotton is the most widely planted species and constituted around 96.7% of all U.S. cotton production in 2017 (USDA, 2018e). Texas and Georgia are the top two cotton-producing states. In 2017, the United States produced 21.3 million bales of cotton, with 9.5 million bales (44.8%) from Texas and 2.25 million bales (10.6%) from Georgia (USDA, 2018e).

Exports are an important component of the U.S. cotton industry. The United States is the world’s largest exporting country for cotton and exports around 3 to 4 times more than what is consumed domestically. Table 1 presents U.S. cotton production, imports, exports, and exports as a proportion of U.S. production for the past 10 years. On average, U.S. cotton exports for the past decade accounted for 81.5% of total U.S. production. After 3 years of decline (2013–2015) in total U.S. cotton exports, largely due to reduced Chinese cotton imports, U.S. exports rebounded to almost 15 million bales for the 2016 marketing year and were projected to be 15.5 million bales for the 2017/18 marketing year, which would be the largest level on record. This high level of exports is due to large supplies, improving demand, and increased trade share for the United States (Shurley, 2018a). The strong U.S. export pattern in the past 2 years has provided price support for cotton, especially in late 2017. 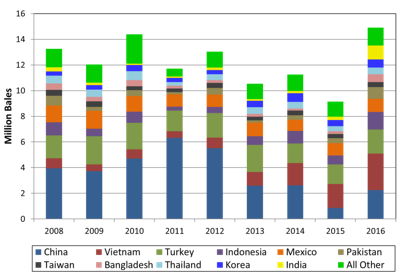 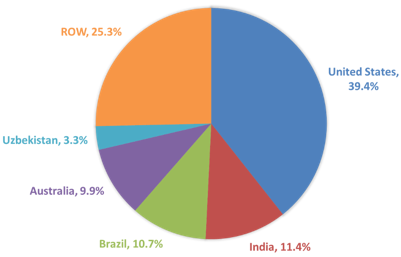 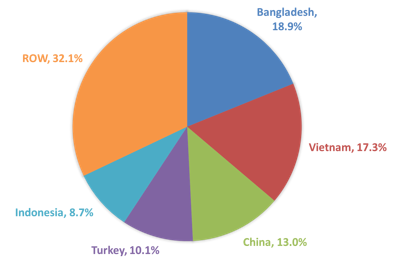 Figure 4 shows the market shares of major exporting countries, calculated as a country’s cotton exports divided by total global exports. The U.S. market share has increased in recent years, and currently accounts for 39.4% of global exports. This increase in market share is attributed to increased U.S. production, lower production in competing countries, and strong demand for high-quality U.S. cotton (Shurley, 2018a). India (11.4%), Brazil (10.7%), and Australia (9.9%) are the major competitors with U.S. cotton in the global export market.

As shown in Figure 5, China is the third-largest importing country for cotton, after Bangladesh (18.9%) and Vietnam (17.3%). China imported 13.0% of cotton traded globally in 2017. China is also an important customer of U.S. agriculture, in general, and of U.S. cotton specifically. Historically, China had been the largest trading partner with the United States for cotton. Starting in 2016, Vietnam became the largest trading partner with U.S. cotton and China became the second-largest trading partner (USDA, 2018c). In 2017, China bought approximately 16% of U.S. cotton exports (Shurley, 2018b). Table 2 lists the levels of production and exports for the major U.S. agricultural commodities. The total value of cotton exported to China was worth approximately $976 million last year, which is the second-highest among all the other row crops after soybeans (USDA, 2018c).

Chinese cotton policies have shifted several times in recent years, with complex effects on the global cotton market. China expanded its government reserve policy for cotton in 2011, which continued through the 2013 crop. Operating like a traditional price support program, the Chinese government bought domestic cotton at prices of $1.40–$1.50 per pound. This cotton was withheld from the market in government reserves, which promoted an artificially high internal price for cotton from 2011 to 2013.

By 2013, there were signs of potential unwinding of the Chinese stockpiling policy. In 2014, the Chinese cotton policy shifted from price supports and building government reserves to paying growers with direct cash payments. This policy is reminiscent of the shift in U.S. farm policy in the 1970s to a target price and deficiency payment approach. Like all Chinese cotton policies, the new target price subsidy is part of a larger and complicated combination of measures. For example, China implemented a tariff-rate quota system. This system determines the amount of cotton imports at a low tariff rate within quota. Beyond the quota level, the cotton imports face a higher tariff rate. In September 2015, China announced that they would only offer a minimum amount of duty-favored import quotas for foreign cotton. In so doing, China was able to use increased amounts of domestic-produced cotton and government reserves while decreasing the need for cotton imports.

The main impact of these combined policies is clear: Chinese imports of cotton lint decreased 40% per year in the 2015 and 2016, with increased yarn imports into China (Clever, 2017). China was able to meet domestic demand for cotton first by consuming from the government cotton reserve and domestic-produced cotton, which reduced the Chinese ending stocks for cotton. Meanwhile, China increased imports of duty-free cotton yarn, as evidenced by large year-over-year increases in cotton yarn imports beginning in 2012 (WISERTrade, 2018). Unlike cotton lint, there are no quota restrictions for yarn imports, and duties are lower for yarn imports into China. Higher imports of yarn partially offset the lower cotton imports in 2015 and 2016. In 2016 marketing year, Vietnam, India, and Pakistan were China’s top three suppliers for yarn, accounting for 72.6% of China’s total yarn imports. China’s yarn imports from Vietnam have grown rapidly as many mills have moved from China to Vietnam. This trend is expected to continue as Vietnam does not maintain import quotas on cotton and enjoys a zero tariff on yarn exports to China (Clever, 2017).

If Chinese tariffs are imposed on U.S. cotton, global cotton suppliers like India, Australia, and Brazil may experience a near-term opportunity to supply more cotton to China. In the short run, the market disruption could be a shock to the U.S. cotton futures market, particularly if hedge fund speculators sell off their long positions. However, the longer-term situation could see more U.S. exports rerouted to other cotton importing countries. This recent history of the change in China’s internal cotton policy suggests a similar reshuffling effect from a bilateral Chinese tariff on imported U.S. cotton. Chinese raw cotton import tariffs would continue to stimulate imports of duty-free yarn from Vietnam, Indonesia, and the Indian subcontinent (Robinson, 2018; Shurley, 2018b).

China’s April 4 announcement of possible tariffs on soybeans, cotton, and other U.S. exports stated that the implementation date for these tariffs would be announced later, depending on when the U.S. tariff actions would take effect (USDA, 2018a). Meanwhile, the United States allows 60 days for public feedback on the proposed tariffs for 1,333 Chinese products. The fact that these trade tariffs are not carried out immediately indicates there may be room for negotiation and that the impact of a cotton tariff could be a moot point.

China remains an important market for U.S. cotton. Meanwhile, the U.S. cotton industry has benefited from the growth in mill use in other countries. If U.S. sales of cotton into China decline as a result of a Chinese tariff, it is possible that sales to mills in other countries could increase to offset part of the decline in China. A Chinese tariff on U.S. raw cotton could continue to stimulate Chinese imports of duty-free yarn from Vietnam, Indonesia, and the Indian subcontinent. The demand for higher-quality U.S. cotton in those markets could continue to expand. Thus, the impact of a bilateral Chinese tariff on U.S. cotton may lead to a reshuffling or rerouting of, rather than a reduction in, U.S. cotton exports.