Impacts of Possible Chinese 25% Tariff on U.S. Soybeans and Other Agricultural Commodities

Trade conflicts between the United States and China have escalated recently. The Chinese government has threatened to impose a 25% tariff on 128 U.S. products in response to a U.S. proposal to impose a 25% tariff on imported products from China (USDA, 2018a). The Chinese list includes several agricultural products, including (but not limited to) soybeans, wheat, corn, sorghum, and beef. Among these commodities, soybeans is the largest agricultural export from the United States to China. Since the United States produces large amounts of soybeans (117 million metric tons (MMT) in 2016) and exports more than half that to other countries, the Chinese tariff on U.S. soybeans alone could generate major economic consequences for U.S. agriculture. In addition to soybeans, China also imports significant quantities of wheat, sorghum, and corn from the United States. Extending the coverage of Chinese tariffs on these products could amplify the economic implications of China’s retaliation policy for U.S. agriculture.

This article highlights the economic consequences of a possible Chinese 25% tariff on U.S. soybeans, wheat, corn, sorghum, and beef. To accomplish this task, we rely on the recent analysis done using the GTAP-BIO model (Taheripour and Tyner, 2018). We show that the Chinese retaliation trade policy, if implemented and continued for several years, could have major implications for the U.S. economy and its agricultural sector.

Three Major Players in the Global Market for Soybeans 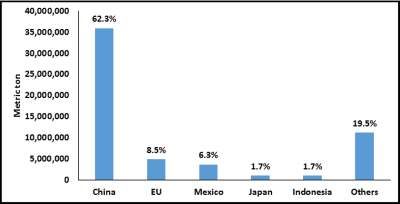 Note: Figures on the bars represent share of each country
in US soybeans exports.
Source: USDA (2018c). 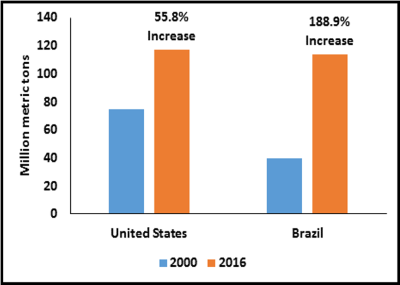 Potential Impacts of the 25% China Tariff

Taheripour and Tyner (2018) used Global Trade Analysis Project-Biofuels (GTAP-BIO), a well-known global economic model, to evaluate the global economic impacts of Chinese tariffs on their imports of U.S. soybeans, corn, wheat, sorghum, and beef. Taheripour, Cui, and Tyner (2017) and Taheripour, Zhao, and Tyner (2017) described the latest version of this model and its improvements over time. GTAP-BIO traces production, consumption, and trade of all goods and services at the global scale by country. The simulations made with this model determine changes in demand and supply of all goods and services and their prices in each region; changes in bilateral trade among all trade partners for all goods and services; changes in allocation of resources; country-by-country changes in economic gains or losses (economic welfare); among other outputs. The latest version of this model represents the world economy in 2011. Since the global soybean market (and also markets for other agricultural products) experienced major changes in production and trade in recent years, Taheripour and Tyner (2018) updated the database of this model to represent the world economy in 2016 to provide more up-to-date analyses.

We present simulation results for changes in trade, production, producer prices, and welfare (economic well-being). It is important to note that the GTAP-BIO simulations represent medium- to long-run impacts, which means that the tariffs would need to remain in effect for at least 3–5 years. These are not short-run impacts.

Given that soybeans are traded worldwide, we analyze the trade impacts for this commodity in detail. Table 1 presents the changes in soybean trade given the standard and higher trade elasticities. In this table, rows represent major exporters and columns represent major importers. This table represents percentage changes in quantities of traded soybeans compared to the base year of 2016. Therefore, it is important to recall that the bases are quite different for each region. A large percentage change on a small base may not be as important as a small percentage change on a large base. In general, one can make the following major conclusions from the results presented in Table 1:

The proposed Chinese tariffs will not significantly affect the global markets for corn, wheat, and sorghum or cause significant changes in the total U.S. exports of these products. However, the tariffs decrease U.S. exports of corn, wheat, and sorghum to China by 42% (0.11 MMT), 82% (0.74 MMT), and 13% (0.68 MMT), respectively. These results are not sensitive to the size of soybean trade elasticities.

Table 1. Changes in Bilateral Trade of Soybeans Due to 25% Chinese Tariff on
U.S. Soybeans (%) 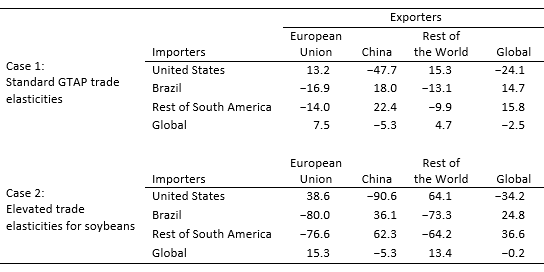 Table 2 presents the impacts of the examined cases on the outputs of selected commodities produced worldwide. The top panel shows the results for the standard trade elasticities and the bottom panel for the higher elasticities. The results represent percentage changes in the quantities of outputs of the selected commodities compared to the 2016 base year. Note again that these are 3–5 year, medium-term impacts after global changes in production have had time to materialize. The results all follow the expected patterns: 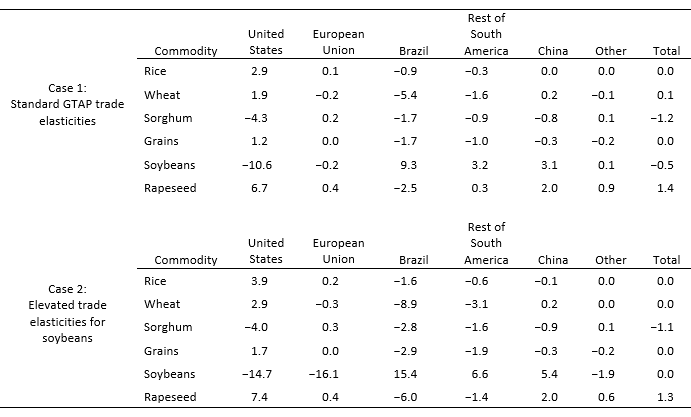 The price impacts of the 25% Chinese tariff on the U.S. agricultural products are limited, according the simulation results obtained from the GTAP-BIO model, which projects medium- to long-run price impacts. The U.S. producer price for soybeans drops by about 4% in response to the 25% Chinese tariff, given the standard trade elasticities, and by about 5% given the higher elasticities. In both simulation scenarios, the changes in the producer prices for most other commodities in the United States and China are small. However, all agricultural commodity prices increase in Brazil, some by relatively larger percentages (2%–5%).

Table 3. Changes in Economic Welfare Due to 25% Chinese Tariffs on Targeted Commodities
(million USD at 2016 prices)

The simulation results examined in this paper show that the 25% Chinese tariff is a lose–lose proposition for both China and the United States. The loss in economic well-being is about the same in both countries. Brazil sees a significant increase in soybean production and an improvement in economic well-being.

Taheripour, F., H. Cui, and W.E. Tyner. 2017. “An Exploration of Agricultural Land use Change at the Intensive and Extensive Margins: Implications for Biofuels Induced Land Use Change.” In Z. Qin, U. Mishra, and A. Hastings, eds. Bioenergy and Land Use Change. Hoboken, NJ, USA: American Geophysical Union (Wiley), pp. 19–37.