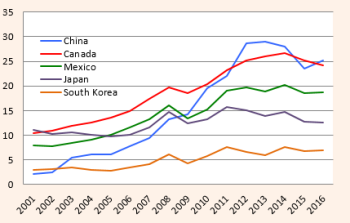 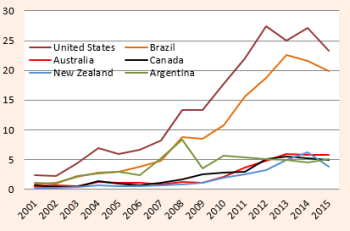 Source: Figure generated from UN Comtrade Data
2016.
Note: China’s import data include products from
two-digit chapters 01 through 24 as well as select
codes in higher chapters, such as cotton.

Agricultural policies implemented by the Chinese government steadily increased domestic support, raising farmer income levels and promoting long-term food security goals. To accomplish these goals, China’s government intervened in the market by providing and then steadily increasing price supports. This intervention led to a price gap between domestic and international prices in agricultural commodity markets. Both this and China’s openness to the world market (demonstrated after joining the WTO in 2001) resulted in a dramatic increase in imports of agricultural commodities and an accumulation of large stockpiles.

Most recently, the Chinese government strived to reduce its large stockpiles, especially for cotton and corn, and narrow the price gap between China’s domestic and international markets by changing agricultural policies, particularly price support policies for cotton, soybeans, and corn. A new target price policy replaced the price support and temporary reserve programs for cotton to decrease production and reduce stockpiles in major cotton-producing regions. A new target price policy was also implemented for soybeans in four Northeast provinces to increase soybean production, and the Chinese government recently announced a pilot program to eliminate the corn price support policy in its Northeastern provinces and Inner Mongolia to reduce production and stockpiles. This new pilot corn price policy will impact the global agricultural market, including the United States, by temporarily reducing China’s imports of sorghum and distillers’ dried grains (DDGs), which are corn substitutes. Imports of these substitutes, especially from the United States, increased dramatically in recent years due to high corn prices caused by China's domestic agricultural policies.

Figure 3: China’s Support Prices,
2004–2015 ($/Metric Ton; Support
Price for Cotton Is Shown on the Right
Axis Due to Different Scale) 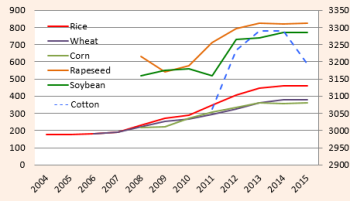 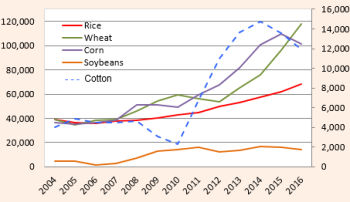 China’s government introduced a minimum purchase price program to encourage production of targeted crops in major producing regions. This policy was applied to rice in 2004 and wheat in 2006. In 2008, a temporary reserve program was introduced for corn, rapeseed, soybeans, pork, and sugarcane (Tuan, 2015), and created for cotton in 2011 (see Figure 3). The minimum purchase price and temporary reserve programs guarantee producers a minimum price for their commodities. When the grain market price falls below the minimum, Chinese farmers can sell their commodities to state enterprises (e.g., COFCO and SINOGRAIN) at the minimum purchase price. The commodities are stockpiled (see Figure 4) with the intent to stabilize supply and consequently reduce imports (Gale, 2013; OECD, 2013).

These polices were introduced to raise Chinese farmers’ incomes and promote long-term food security goals, and the Chinese government has continuously increased minimum prices to protect Chinese producers from rising input costs and the appreciation of the yuan (OECD, 2013). Beginning in 2004, minimum commodity prices were set below world market prices. However, China’s support prices increased annually through 2015, despite the fall in international prices in 2008. China’s higher prices provided an economic incentive for Chinese farmers to increase production and created a price gap between domestic and world prices, encouraging lower-priced imports (see Figure 5).

In total, China’s grain production doubled between 1978 and 2013, while the use of fertilizer input (based on nitrogen equivalent) increased more than seven-fold (Zhong, Chen, and Zhu, in press). In 2013, the use of fertilizer in China’s crop production was three times higher than the world average (Zhong, Chen and Zhu, in press), creating negative environmental impacts.

These policies distorted China’s agricultural markets, creating a financial burden and new challenges for the Chinese government (Clever and Xinping, 2015). As other nations cut farm subsidies for agriculture, China’s subsidies continued to increase, while subsidies already allocated to farmers reached WTO limits (The Economist, 2015). In a 2016 press release, the USDA claimed that China’s government provided excessive domestic support to its farmers for producing agricultural commodities and failed to meet its commitment to the WTO (USDA, 2016a). China has recently been exploring other methods—like decoupled payments or other allowable agricultural support under the WTO regulations—to support farmers’ incomes (Clever and Xinping, 2015; OECD, 2015).

China is now debating how to reform its price support program to reduce price interventions, manage imports, and balance stockpiles of agricultural commodities (Gale, 2015). In response to environmental concerns, Chinese officials emphasized sustainable food production in their recent Five Year Plan and their No. 1 Document (an important document that addresses agricultural policies and the first document released by the Chinese Communist Party each year; Anderson-Sprecher and Bugang, 2015).

New Target Prices for Cotton and Soybeans, but Termination of Corn Price Supports

The Chinese government replaced the old price support and temporary reserve programs in 2014/15 by introducing a new target price policy pilot program for cotton and soybeans. Under this policy, farmers receive a direct payment from the Chinese government if the market price is lower than the target price; this payment is calculated based on total production and the difference between the target and market prices (Huang and Yang, 2016). Unlike the old price support policy, the Chinese government does not purchase and store commodities. This is particularly important given China’s large cotton stockpiles (see Figure 4).

The pilot target price program for soybeans was implemented to encourage production. Prior to implementation, many farmers preferred to plant corn because it was more profitable. The new target price covers soybeans in the four Northeast provinces of Heilongjiang (the largest soybean-producing province in China), Jilin, Liaoning, and Inner Mongolia (Anderson-Sprecher and Bugang, 2015).

To encourage farmers to produce soybeans, at the beginning of 2014 a new target price ($770.50/Metric Ton) was set slightly higher than the old price support ($740/Metric Ton) and has remained constant since its implementation. However, the new target price has not significantly impacted soybean production (12.1 mmt in 2014/15 to 13.8 mmt in 2017/18), and China still imports massive amounts of soybeans (Clever, 2017b).

At the end of March 2016, Liu Xiannan, Director of the Economy and Trade Office of China’s National Development and Reform Commission, announced an end to the price support policy for corn. The main reasons for ending the corn price support included China’s excessive stocks of corn, environmental concerns, and unsustainable farming practices, particularly excessive fertilizer use (Anderson-Sprecher and Ji, 2016). China experienced corn surpluses for consecutive years, causing stockpiles to grow (Figure 4). Some of these corn stocks deteriorated and could not be sold (Anderson-Sprecher and Ji, 2016).

To address these issues, the Chinese government introduced a new mechanism of market purchase for corn and ended the temporary reserve program in the Northeastern provinces and Inner Mongolia (Anderson-Sprecher and Ji, 2016). As a result of announcing the elimination of the corn price support policy, Chinese corn prices fell in 2016. Falling prices led to a paper loss of over $10 billion for China’s stockpiles and even larger total costs when considering the cost of storing corn and that some corn stocks had already molded (Anderson-Sprecher and Ji, 2016). On the other hand, the Chinese government encouraged increased corn consumption in industrial uses, such as processing and ethanol production (Gale et al., 2009).

Many Chinese farmers profited from producing corn because of its high domestic price. By ending the price support program, China’s domestic corn price will likely continue to fall and producing corn may not be as profitable (Anderson-Sprecher and Ji, 2016). According to China’s official statistics in the 2017 USDA report, China’s overall grain production fell by 2.8% in 2016 compared to the previous year; approximately 83% of this reduction was due to the decline in corn production (Kim, 2017). The import level of feed substitutes such as sorghum, barley. and DDGs, rapidly increased beginning in 2012 because of China’s high domestic corn price, but as of 2016, feed substitute imports decreased as a result of declining domestic corn prices,.

U.S. exports of sorghum and dried distillers grains (DDGs) to China increased dramatically in response to China’s high domestic corn price while China’s price support program was in place. Prior to the surge in China's corn prices, the United States exported virtually no feed substitutes to China, but by the 2014/15 marketing year the United States was exporting 90% of its sorghum to China (Anderson-Sprecher and Ji, 2016; Wang and Malaga, 2016). Tariff rate quotas also limit corn imports into China, but up until recently no similar import restrictions on feed substitutes existed. However, China recently imposed anti-dumping duties and potential countervailing duties on U.S. exports of DDGs to limit their imports (Anderson-Sprecher and Ji, 2016).

Eliminating China’s Northeastern corn price support—the recent pilot program—reduced U.S. sorghum and DDG exports. In the short-term, this new policy, which ends the price support for corn, reduced U.S. and world exports of feed substitutes to China due to the release of existing Chinese corn stock reserves. In the long run, when corn stockpiles decline to a certain level, domestic demand and supply for corn are expected to determine China’s domestic corn price and imports of feed substitutes (Zhong, Chen and Zhu, in press). China’s evolving agricultural polices should be closely monitored by the U.S. government and agribusiness exporters (Gale, 2015). Reviewing China’s agricultural policy changes highlights how these policies play a role in U.S. agricultural exports to China.

Despite China’s evolving agricultural policies and recent economic downturn, import expansion in China may be inevitable in the long run (Marchant et al., 2016). China has one fifth of the world’s population but only one tenth of the world’s arable land. China will likely not be able to avoid some dependence on global markets, including the United States, through either trade or foreign direct investment.