The greatest growth in U.S. exports to China has been in commodities that do not conflict with China’s domestic policies for maintaining self-sufficiency and are in short supply. The best example is soybeans, which are needed for China’s expanding livestock industry. Hides and skins also pose no threat to China’s local industry. Consumer demand is strong for new products, especially those perceived to be healthy and have passed U.S. food safety regulations, particularly among higher income households in urban areas. Dairy imports, for example, increased after China’s melamine food safety issue in 2008.

Trade with China Is Concentrated on Bulk Commodities 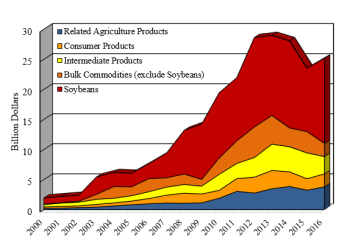 Bulk commodities, especially soybeans, are the largest export category, followed by related agriculture products and intermediate and consumer products. Bulk commodities—grains, cotton, tobacco, pulses, soybeans and other oilseeds—now account for about 65% of the value of U.S. exports to China. The value of U.S. bulk commodities exported to China from the 1980s through the 1990s averaged $800,000 per year.

China’s livestock sector has evolved from backyard production to large-scale commercialized operations, which increased demand for soybean meal in feed rations at a faster rate than the growth in domestic meat production. Although demand for soybean meal for livestock feed increased, China’s soybean production has not expanded over the past 20 years, but decreased. Soybean yield growth stagnated from 1996 to 2016. The area planted to soybeans declined from 2009–2015 due to lower profitability compared to alternative crops, such as corn, which have been supported by government programs and policies. There have been almost no constraints or restrictions on soybean imports.

Sorghum, cotton, and wheat are the next leading bulk commodities exported to China. Exports of sorghum increased due to China’s recent high corn support prices and policies limiting imports of lower-priced corn from the global market. Livestock producers began seeking alternative feeds that could be imported at lower prices, such as distillers’ grains, sorghum, and barley. China’s imports of United States distillers’ grains grew rapidly, reaching $1.6 billion by 2015. Beginning in 2012/13, China increased sorghum imports from the United States; by 2015/16, U.S. sorghum exports to China totaled over $2 billion.

Large Corn Exports to China Have Not Yet Materialized

Many commodity analysts expected China to be a major importer of corn due to increasing feed demand for its growing livestock sector and expectations of a limited ability to expand the area under corn production. However, China did not begin to significantly import corn until 2011/12, with 5.2 million metric tons. Since then, China has only averaged 3.8 million tons per year. In contrast, Japan and Mexico each import at about 14 million metric tons per year (USDA, 2017b).

Many analysts thought corn area could not be expanded, but since 2000/01, China’s corn area increased from 23 million hectares to 38 million hectares by 2015/16. Corn production doubled over this time period. Expanded planting area was driven by government policies setting high procurement prices and import restrictions on corn, enabling corn to be more profitable than competing crops, such as soybeans. Much of the new corn area was achieved by expanding into marginal areas, especially in Northeast China. 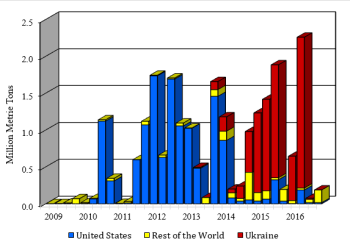 The United States also faces strong competition in exporting corn to China. Beginning in 2014, Ukraine became the major exporter of corn to China (see Figure 2). In 2012, Ukraine and China signed a loan-for-crops contract worth $3 billion, which provided credit to Ukraine in exchange for corn supplies to China (Olearchyk and Blas, 2012). Increased imports from Ukraine may also be part of China’s new Silk Road plan, which is meant to revitalize trade with Europe and neighboring Asian countries and to diversify China’s import suppliers. Even though U.S. corn was priced lower in late 2014 and 2015, China significantly increased corn imports from Ukraine due to the financial risk of U.S. corn imports being rejected due to unapproved biotech traits (Anderson-Sprecher, Wei, and Liwen, 2015; Shuping and Stanway, 2015).

The United States faces competition to preserve and expand its market share of corn exports to China. This may prove difficult because, even given lower costs of production in the United States, Ukraine’s agreements with China may continue to boost corn imports from Ukraine.

China has the world’s largest leather-processing industry, which is driven by strong domestic demand for finished leather products, low environmental constraints for processing hides, historically low-priced labor, adoption of modern processing facilities, and a strong export market for finished leather products. China is the largest export market for U.S. hides and skins, accounting for 51% of the U.S. export world market share over the past five years. The next three largest export markets are South Korea, Mexico, and Canada. The United States exported $227 million worth of hides and skins to China in 2000, increasing to $1.65 billion by 2013. Exports in 2016 were valued at almost $1 billion.

The value of U.S. consumer-oriented food products exported to China increased from almost $300 million in 2001 to $3 billion by 2013 before declining to a little over $2 billion in 2016 (see Figure 1). Consumer-oriented products include beef, pork, and poultry meats, dairy, fruits, vegetables, nuts, snack food, breakfast cereals, prepared foods, beverages, condiments, and other foods. Pork, dairy, tree nuts, and fresh fruits are major consumer food products exported to China. Exports of dairy products to China had been quite strong. In 2015, registration approval policies began to change, making it more difficult to export dairy products, as well as other food products, to China (Anderson-Sprecher, Wei, and Liwen, 2015). 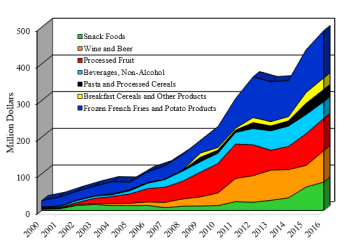 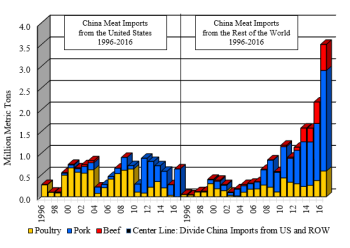 A major driving force in China’s domestic market is consumer awareness of food safety and nutritional value. Imported foods are often perceived to be safer than domestically produced foods, are associated with a higher nutritional value, and have more trusted nutritional labels. A number of food safety incidents and rising levels of pollution in China’s water, soil, and air have increased the level of concern many Chinese consumers have for food safety, especially for children’s food products.

Current U.S. meat exports to China lost significant market share compared to exports in the early 2000s (see Figure 4). A number of countries placed a ban on U.S. beef imports based on the December 2003 bovine spongiform encephalopathy (BSE) case. China’s Ministry of Agriculture lifted the ban in September 2016, which is the first of three steps required in an ongoing process before the United States will be allowed to export beef to China (Inouye, 2016).

In China, long-term business relationships are important and were partially lost during this import ban period. Brazil, Uruguay, and Australia are the largest beef exporters to China. Brazil is gaining market share as a low-cost producer, and exports to China grew over time. The United States will likely be able to successfully compete in higher-quality markets with grain-fed beef for specialized retail outlets, hotel, and restaurant sectors.

China produces and consumes half of the world’s pork and in 2016 became the largest importer of U.S. pork, followed by Japan and Mexico. The European Union (EU) is the largest pork exporter to China, with Germany and Spain the largest suppliers. In 2016, U.S. pork accounted for about 20% of China’s total pork imports.

China delisted a number of U.S. pork plants following positive tests for ractopamine (a feed additive) in 2014. All U.S. pork exports to China must be ractopamine-free. To prevent commingling, the United States has separate pork production and processing facilities for products exported to China. Beginning in 2016, previously delisted U.S. pork plants have started to gain approval by China.

About 66% of U.S. pork exported to China is edible offal, which includes ears, stomach, feet, snouts, and other parts. U.S. exports of swine breeding stock to China increased significantly from the early 2000s, to $19.8 million in 2013, as China’s herd expansion continued. However, U.S. exports dropped to previous levels as China contracted pig herds in 2015 due to increasing losses in pork production.

U.S. poultry exports to China consist mostly of offal and feet, for which there is little demand in the United States. The United States has also been the major exporter of grandparent flocks (the final generation of breeding birds) to produce white-feathered broiler chickens and, to a lesser degree, layers. Exports of U.S. live breeder chicks for broilers and layers to China averaged about $6.5 million per year in the 1990s. Exports grew to $38.7 million for broiler chicks by 2013 and accounted for about 20% of U.S. exports (USDA, 2017a).

Broiler chick exports dropped to $330,000 as China banned U.S. imports in January 2015 due to an outbreak of high pathogenic avian influenza (HPAI). South American countries have benefited from the continued import ban on grandparent stock for white-feathered poultry from the United States and some European countries, increasing their exports of broiler chicks to China.

James Hansen (jhansen@ers.usda.gov) is Senior Economist at the USDA, Economic Research Service, Washington, D.C. Mary A. Marchant (mmarchant@vt.edu) is Professor, Department of Agricultural and Applied Economics, Virginia Tech, Blacksburg, VA. Francis Tuan (ftuan@waeesllc.com) is Lecture Professor, School of Agricultural Economics and Rural Development, Renmin University of China, Beijing, China. Agapi Somwaru (agapi.somwaru@gmail.com), is an Economic Consultant. Acknowledgments: Funding for this work was provided, in part, by the Agriculture and Food Research Initiative (AFRI) of the U.S. Department of Agriculture National Institute of Food and Agriculture, USDA-NIFA-AFRI Grant Number 2014-67023-21946, “Expanding U.S. Market Access in China’s Evolving Agricultural and Trade Policy Environment” and the Virginia Agricultural Experiment Station and the Hatch Program of USDA-NIFA. Additionally, the authors are grateful to the Choices editors, several anonymous reviewers, and the China research team graduate students Wei Zhang (Virginia Tech) and Jue Zhu (Nanjing Agricultural University and Virginia Tech Graduate Student Fellow). The views expressed here are those of the authors and do not represent those of the Economic Research Service or the U.S. Department of Agriculture.