International trade deficits have recently been reputed as “bad” for the economy; however, agriculture has posted a trade surplus since 1959 (Cooke, Melton and Ramos, 2017). For U.S. agriculture, trade represents 20% of farmers’ income on average, and more for specific commodities—70% for cotton and tree nuts; 50% for wheat, rice, and soybeans: and almost 20% for meat and dairy products (Hafemeister, 2017). Thus, tossing trade would be comparable to U.S. farmers destroying 20% of their yields. China, which has advanced to become the United States’ largest agricultural export market in an unprecedented time frame, plays a key role in the economic wellbeing of U.S. agriculture. 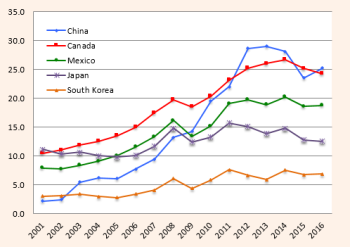 In 2012, China surpassed Canada to become the leading market for U.S. agricultural exports (see Figure 1). As China has one-fifth of the world’s consumers but one-tenth of the world’s arable land, the potential is considerable for China’s continued growth as an importer of U.S. agricultural products. From China’s perspective, the U.S. is its leading supplier of agricultural imports. China has adopted more open trade policies since joining the World Trade Organization while—at the same time—enacting policies that promote food security, price stability, and higher incomes for farmers. These policies have led to increased price distortions between Chinese and international markets.

This theme builds on a series of previous Choices articles on China. These timely articles are important for academic researchers, government officials, and export industries. They analyze recent changes to Chinese policies and their impact on global commodity markets, with a focus on U.S. impacts. These papers provide U.S. agribusiness exporters with information needed to evaluate potential risks and opportunities caused by differential agricultural and trade policies in China.

Several of the articles in this theme are based on detailed interviews with agribusiness leaders and government officials working to facilitate trade based on their actual experiences, challenges, and successes encountered while exporting to China. Interviews were conducted in China and the United States as part of the “Expanding U.S. Market Access in China’s Evolving Agricultural and Trade Policy Environment” project with USDA-NIFA.

Funing Zhong and Jing Zhu discuss the evolution of China’s food security objective and the impact of this deep-rooted policy priority on the formation of China’s agricultural policies, which subsequently affect its domestic production, market, and international trade, especially after its integration into the world economy, designated by its WTO accession in 2001.

Mina Hejazi and Mary A. Marchant summarize China’s agricultural support policies since China’s accession to the WTO, describe recent challenges due to the implementation of new agricultural policies, and explain China’s evolving policies and their impact on U.S. exports. The increasing gap between Chinese domestic and international prices is discussed, as are China’s growing commodity stockpiles and its newly adopted policies to address these issues.

David Orden, Lars Brink, and Mina Hejazi address one of the tensions in U.S.–China agricultural trade. They examine the motivation, issues to be adjudicated, and possible outcomes and implications of the September 2016 U.S. complaint that China’s domestic support for wheat, rice and corn exceeded its WTO commitments in the years 2012-2015. At issue is the level of China’s market price support. The article looks at measurement of this support under WTO rules and the relation of this measurement to the price gap between China’s domestic and international prices highlighted throughout this Choices theme.